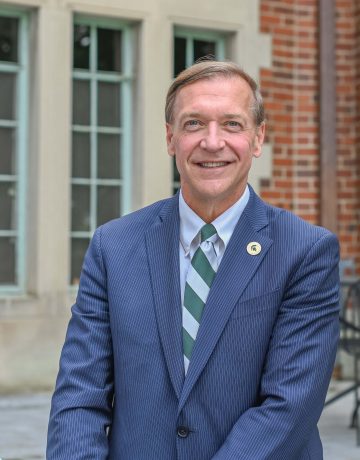 Masks are strongly encouraged at all times except while eating regardless of vaccination status.

Yellow dots will be available for attendees to place on their nametag as an indicator for others to remain at a respectful distance when networking.

DEC Board, Life and Gold Members with up to two accompanied guests are welcome to join a private Q&A style reception. No receiving line with speaker handshakes will take place.

A maximum of 8 attendees will be assigned to a table.

Your safety is important to us. Click here to see our safety plan. Check back regularly for updates leading up to the meeting. (Updated December 2, 2021) 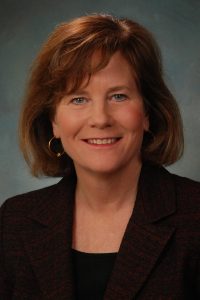 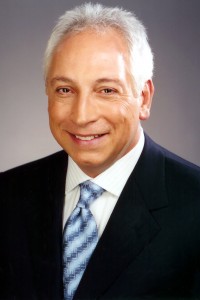 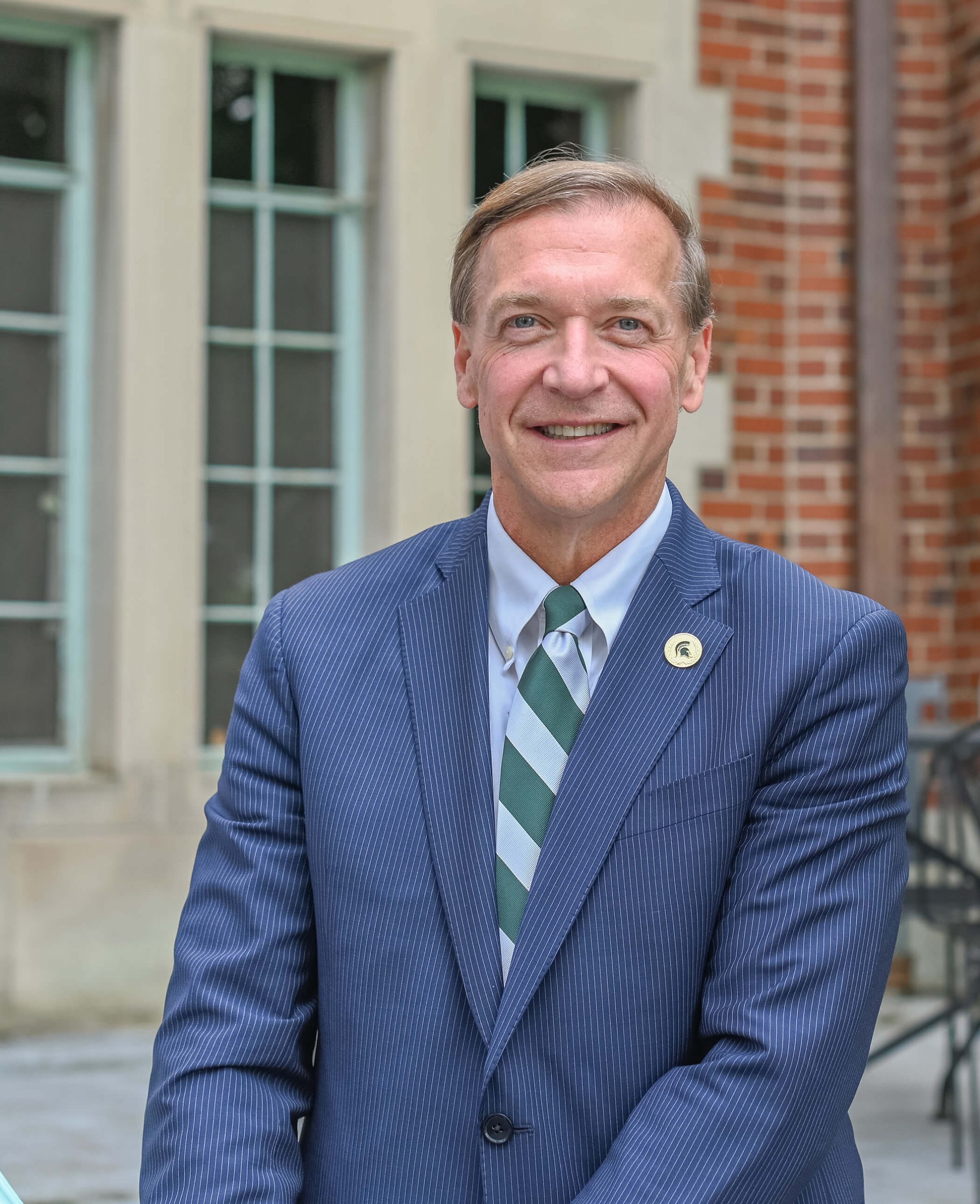 Samuel L. Stanley Jr., M.D., was selected by the Michigan State University Board of Trustees as MSU’s 21st president, effective Aug. 1, 2019. Since his arrival at MSU, Dr. Stanley has moved decisively to ensure the university is a safe, respectful and welcoming place for all. Student success and well-being and continuing to grow MSU’s extraordinary regional and global impact are his top priorities.

His infectious disease research background has informed MSU’s response to the COVID-19 pandemic as he leads the university’s work to safely advance its mission of education, research and outreach.

Stanley launched a comprehensive strategic planning process for the university, created a diversity, equity and inclusion planning committee and appointed two relationship violence and sexual misconduct expert advisers. He has overseen several changes in the institution’s administration, organization and programs to improve services, operations and accountability.

Continuing to expand the university’s research enterprise is another priority. MSU’s research portfolio totaled $725 million in 2019 expenditures. MSU’s $730 million Facility for Rare Isotope Beams is planned to begin scientific user operations ahead of schedule and on budget in 2022. Operating at the frontiers of nuclear science, it will yield insights into the nature of the universe as well as practical discoveries to enhance everyday life. FRIB reached a milestone in 2020 when the U.S. Department of Energy designated it a DOE Office of Science user facility.

A researcher, patent holder and former technology transfer executive, Stanley supports academic and industry collaborations to leverage both their economic impact and the potentially enormous contributions they can make to society.

Stanley also reorganized oversight of the university’s three medical colleges and its clinical services into a health sciences entity. And, in January 2021, MSU signed a 30-year agreement with the Henry Ford Health System in Detroit to foster groundbreaking research, best-in-class cancer care and health care professional diversity while improving access in traditionally underserved communities. In another collaborative relationship, MSU and Apple Inc. agreed to partner on a Developer Academy in Detroit, the company’s first such skills development facility in the United States.

Active in higher education organizations, Stanley sits on the boards of the Association of Public and Land-grant Universities, the University Innovation Alliance and the Michigan Association of State Universities. He is an engaged member of Michigan’s University Research Corridor, Business Leaders for Michigan and the Association of American Universities, having served previously on the AAU board. Stanley holds appointments to the Michigan Employment Relations Commission’s Health Care Advisory Committee and the McKinsey & Company Taskforce on Higher Education and Opportunity. He also is a past member of the NCAA Board of Directors and NCAA Board of Governors.

Born in Seattle, Stanley earned a Bachelor of Arts in biological sciences (Phi Beta Kappa) from the University of Chicago. After earning his medical degree from Harvard Medical School, he completed resident-physician training at Massachusetts General Hospital and then went to Washington University in St. Louis for a School of Medicine fellowship in infectious diseases. There, he became a professor in the departments of medicine and molecular microbiology, recognizing the collaborative nature of his research.

A distinguished biomedical researcher, Stanley was one of the nation’s top recipients of support from the National Institutes of Health for his research focusing on enhanced defense against emerging infectious diseases. He is an expert in the biological mechanisms that cells employ when responding to infectious agents.

Stanley has served as chair of the National Science Advisory Board for Biosecurity, which advises the U.S. government on issues related to the communication, dissemination and performance of sensitive biological research. He was a member of the National Advisory Allergy and Infectious Diseases Council at the NIH and a member of the NIH director’s Blue Ribbon Panel on the National Emerging Infectious Diseases Laboratories. He also served as an ambassador for the Paul G. Rogers Society for Global Health Research and has received an honorary doctorate in science from Konkuk University in South Korea.

Prior to becoming MSU’s president, Stanley served as president of Stony Brook University on Long Island in New York. At Stony Brook, he focused on improving campus diversity and student success and elevated the university’s research profile by supporting a new institute for artificial intelligence. He chaired the board of Brookhaven Science Associates, which manages Brookhaven National Laboratory on behalf of the U.S. Department of Energy.